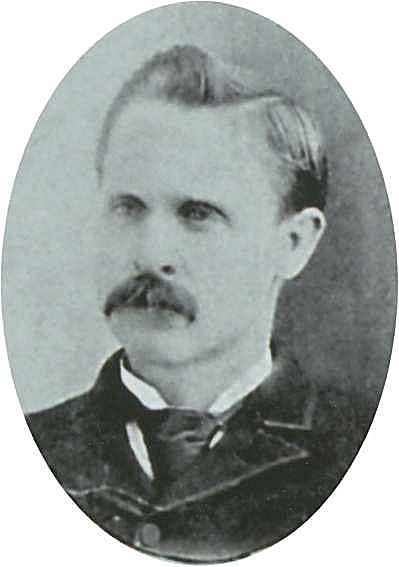 Biographical Sketch On The Life Of Jephthah Clayton McQuiddy

"Seest thou a man diligent in his business? he shall stand before kings; he shall not stand before mean men." The truth of this oft-quoted proverb was demonstrated in the life of J. C. McQuiddy. No life more aptly illustrates the wisdom of God as expressed in this proverb than did the life of Brother McQuiddy. He was a successful man from many angles. He was successful in business, as a preacher of the gospel, as an editorial writer, and as a Christian business man.

J. Clayton McQuiddy was born on December 24, 1858, in Marshall County, Tenn. He was reared about eight miles from Lewisburg, the county seat of Marshall County. His parents were Newton and Nancy Shofner McQuiddy. His father was a farmer, and he taught his children the valuable lessons of industry and economy, two of the most useful lessons of life.

Brother McQuiddy received his early training in the public schools of Marshall County. At the age of seventeen he entered Mars' Hill College, which was founded and operated by the late T. B. Larimore, near Florence, Ala. He took the full course prescribed for preachers at Mars' Hill and became a fluent speaker. Later he entered Winchester Normal, at Winchester, Tenn., and took thorough courses in languages, mathematics, and English literature. He was blessed with a strong mind and enjoyed mental work. He left Mars' Hill College in 1877. He learned to love Brother Larimore and continued to love him to the day of his death.

While Brother McQuiddy was in his teens he became a Christian. The lamented J. M. F. Smithson, the blind preacher, was in a meeting at Old Antioch, in Maury County, Tenn. Newton McQuiddy and his son, Clayton, attended that meeting. J. C. McQuiddy responded to the first invitation that he heard, made the good confession of his faith in Christ, and was baptized the same day by James H. Morton, in Duck River, at Leftwich Bridge. From that day forward he lived faithful to the Lord. After finishing his school work at Winchester Normal, he was called to work with the church at Columbia, Tenn. While preaching for the church at Columbia he did much evangelistic work, conducting successful meetings in Tennessee and Alabama. During his evangelistic work he held a meeting at Bunker Hill, in Giles County, Tenn., in which meeting our brother, F. W. Smith, made the confession.

In 1879, F. G. Allen established, in Louisville, Ky., a paper known as "The Old Path Guide." This paper was the first in magazine form and appeared monthly. The paper grew in influence and circulation. Brother McQuiddy became editorially connected with it in 1883. He traveled extensively in Middle Tennessee and South Kentucky in the interest of the paper. The paper increased rapidly in circulation through his efforts, and it seems that Brother McQuiddy had found his field of activity.

Brother McQuiddy became office editor and business manager of the Gospel Advocate in 1885, and moved to Nashville, Tenn. He was twenty-seven years old when he began work with the Advocate. Brethren Lipscomb and Sewell made announcement in the first issue of the Advocate published in 1885 that arrangements had been completed for Brother McQuiddy to begin work at once. In the next issue Brother McQuiddy made announcement that he was ready for work. Since he continued with the Advocate for so many years even unto his death, it is well to note how he began his work. The following quotation is taken from his announcement: "With this number I begin my work on the Gospel Advocate. It has already been conjectured that it will be well done, but this remains to be demonstrated. It is quite natural for us all to make many noble resolutions in any new and arduous undertaking; so I have determined to exert my influence, however small that may be, for the promotion of the Advocate's interest. But in doing this, I propose to stand firm and unwavering to all my sincere convictions of right. I intend to try to perform some humble part in sending the glad tidings of salvation to the perishing souls of earth. I pray that I may do much good, but how much I dare not promise. . . . Brethren, we desire your hearty cooperation. Shall we have it? Me thinks I hear many voices responding, `Yes, yes,' and with this comforting assurance, and remembering that God is ever with his followers, I drop my pencil and go to work."

This expresses how he began work with the Advocate and also gives the key to his success. He was diligent in business and made a success of the Advocate. He continued with the Advocate and became associated in editorial work with David Lipscomb, E. G. Sewell, F. D. Srygley, E. A. Elam, T. B. Larimore, a galaxy of heroes of the gospel, who have passed to their reward. He also was associated with J. W. Shepherd, M. C. Kurfees, F. W. Smith, and F. B. Srygley, who are still standing in the front ranks of the army of the Lord on this side. He was a great man and had great men for his companions.

It was largely through Brother McQuiddy's management that the Gospel Advocate wielded such a powerful influence in the South. The writer would not, even if he could, detract in the least from the honor and glory that belong to Brethren Lipscomb and Sewell in doing so much good through the Advocate, but they could not have done what they did do had it not been for J. C. McQuiddy, who increased the circulation of the paper and managed it in such a way as to enable Lipscomb and Sewell to instruct the brotherhood through the Advocate. J. C. McQuiddy's shrewd business qualities made the Advocate the outstanding paper in the brotherhood of faithful disciples. In addition to managing the paper, a series of Sunday-school literature was developed until possibly more good was accomplished though the Sunday-school literature than through the columns of the Advocate.

In 1902 he organized the McQuiddy Printing Company. This company rapidly developed until it became one of the largest and best printing houses in the South. The McQuiddy Printing Company outgrew the Gospel Advocate Company and became so large and strong in its field that it printed the Gospel Advocate and the Sunday school literature. Brother McQuiddy was president of the McQuiddy Printing Company at the time of his death. He began as office editor of the Gospel Advocate, then passed to the position of manager, next to associate editor, and finally became the senior editor of the Advocate. He was successful in every endeavor that he made. He had keen business judgment, together with a strong Christian influence and indefatigable determination to succeed, and these qualities brought him the abundant success which he achieved.

In addition to all of his other work, he found time to preach the gospel and contend earnestly for the faith. His written discussion, " The Folk-McQuiddy Discussion on the Plan of Salvation," is a masterpiece of polemic literature. Brother McQuiddy was loyal to the word of God and stood foursquare with courage and conviction against error and for the truth. His liberality and generosity made him a great factor in promoting the interest of the churches of Christ in Tennessee.

He died suddenly on August 3, 1924. He was sixty-five years old when he died. The funeral services were held in the Russell Street Church, in Nashville, by brethren T. B. Larimore and S. H. Hall. He was ever interested in the work of the church in preaching the gospel and caring for orphans. 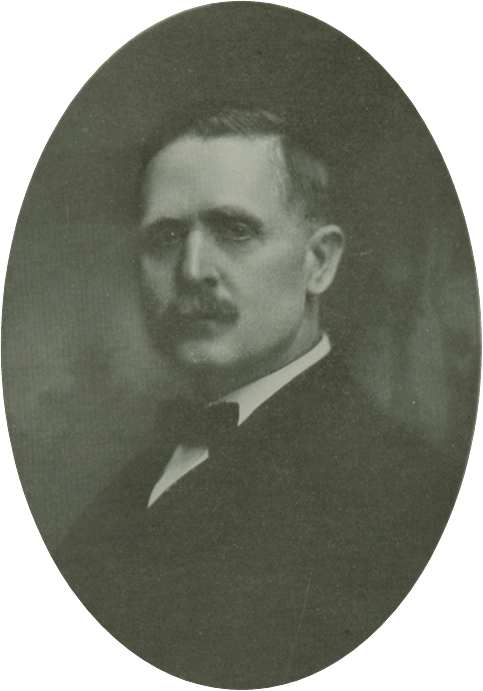 Location Of The Grave Of J. C. McQuiddy

J. C. McQuiddy is buried in the Mt. Olivet Cemetery, Nashville Tennessee. The cemetery is located at 1101 Lebanon Pike, Southeast of downtown Nashville. Click over to Mt. Olivet for map and location of the grave in the cemetery. His remains rest in Section 14 near Granville Lipscomb. 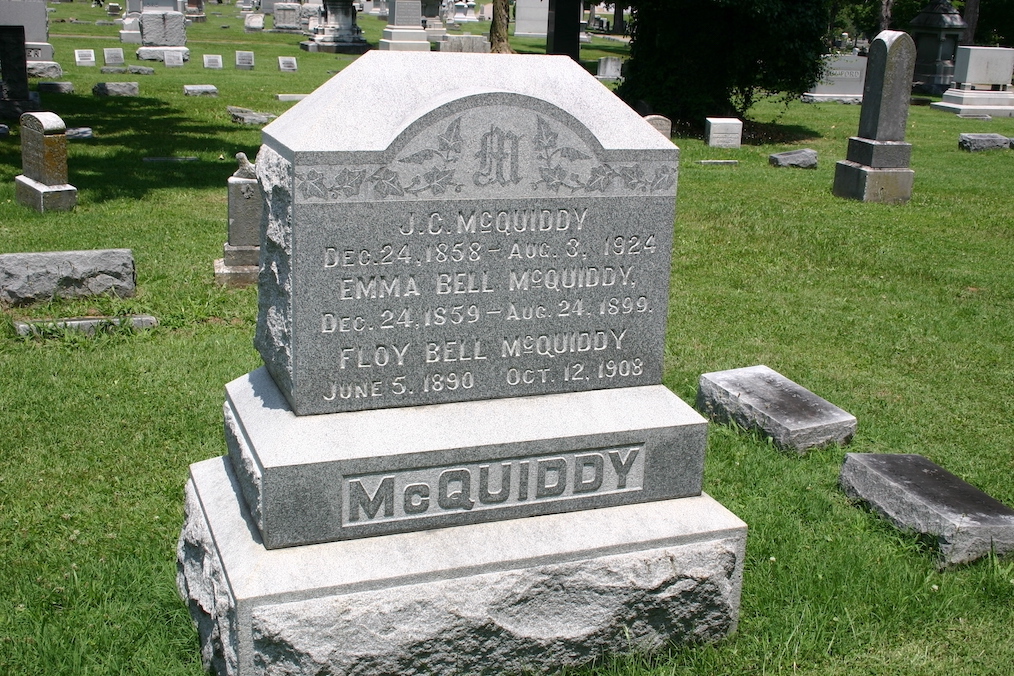