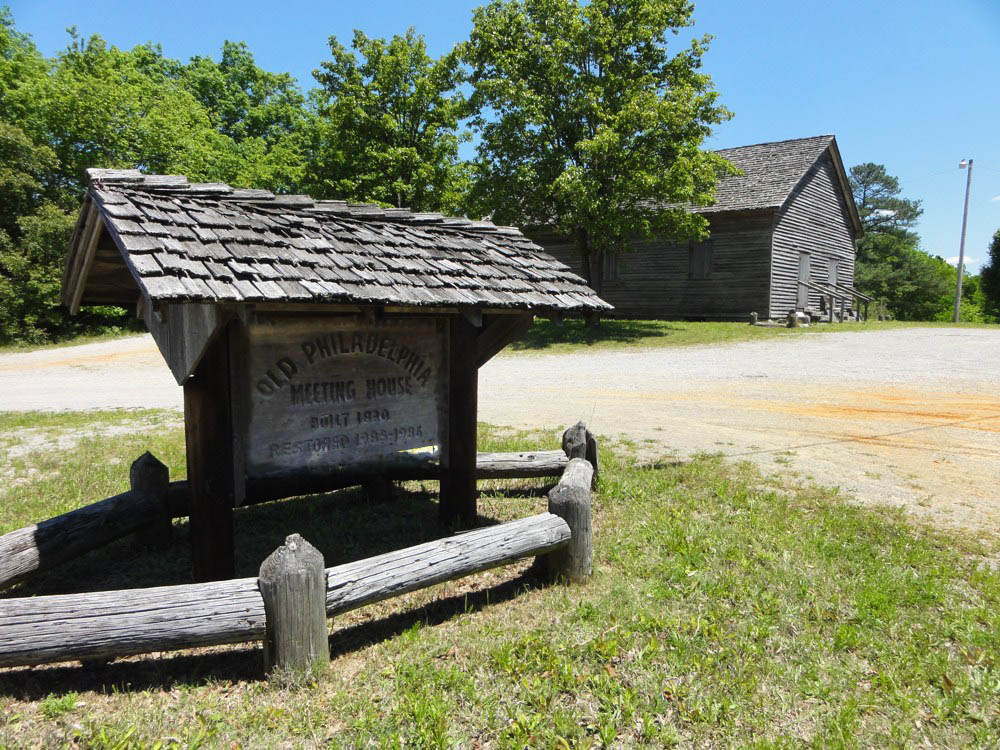 The Old Philadelphia Meetinghouse is located in the Cumberland Gap area of Tennessee, just south of McMinnville, in the Viola Community. As early as 1805 the Price family and others from North Carolina moved into the area uniting with people in the community on the basis of taking the Bible as their only guide. Some say they were influenced byJames O'Kelley, and his movement in the east. Ultimately New Testament Christianity was established in that community, separate from the influence of the Campbells and Stones. In the photos below you will see photos of the old building that went through a major renovation in the last few years. The old building saw many preachers, a list of a few of which are in a photo below. One great preacher wasJesse Londerman Sewell. He was the oldest brother ofE.G. Sewell. The elder brother preached at Old Philadelphia many years and is buried in the cemetery behind the old meetinghouse. In the early 20th century it was mainly used by African-American brethren, enjoying the preaching of great men such asMarshall Keeble. Scroll down to the bottom of the page for directions to this most interesting site in South-Central Tennessee. Also click on the other links below with more in-depth histories on this great work. Today this great old building is used by the community for meetings, and occasionally Gospel Meetings are held there. For the interested fan of the Restoration Movement, any visit in the South Central Tennessee area would have to include a stop in Viola at the Old Philadelphia Meetinghouse.

Items Of History
A Gospel Advocate Article From 1893

The first preaching of the primitive gospel in this vicinity was done in *1833, by Calvin Curlee and Joseph Ramsey, Sr., in what was then known as the Blue Springs Baptist Church, owned by a sect of the Baptists called Separate Baptists. The place is now known as Viola, and is about four miles from Philadelphia. These brethren who had previously been Baptists were then called New Lights and Schismatics. The Baptists never permitted them to preach in their house but the one time. But these men of God were not to be so easily discouraged. They continued to visit the neighborhood and preach in school-houses, under stare trees, and in private houses with no little success. the first to accept the truth as presented by them were George Stroud and wife, who were Separate Baptist. Then followed David Ramsey and wife, John Brown and wife, and Benjamin Garner, Sr., who was the first deacon of the church. His family were all Baptists but his wife, who was one of the best informed women of the community, and most of her family came into the fold. Some of the Garner family, however are still Separate Baptists, and among them one or two still preach that faith. John Davis and most of his family, including his wife, tow daughters, and two sons, Robert and Byron (the latter was afterwards known as Dr. Davis), and many others too numerous to mention, accepted the truth and became obedient to the faith. Ramsey and Curlee continued to preach. The church met in what was known as Wolf's school-house. In the year 1834 Tilman Cantrell preached for the congregation. The church has grown rapidly in numbers, and in the year 1835 began to build a house of worship, which they named Philadelphia. Around it has grown up a little village called Vervilla. Brother Curlee continued to preach for the church, but not regularly till 1851. The church had during this time gathered into its fold many of the best citizens of the community. As I have no perfect list of their names I will not attempt to give them.

Among the preachers who labored at Philadelphia and in the surrounding country we mention Calvin Curlee, Joseph Ramsey, Trott, Eichbaum, William Hooker, John McDonald, Tolbert Fanning, Reese Jones, and Sandy E. Jones. L.N. Murphy also preached extensively through Warren and adjoining counties. Also Randall Hall, of Rutherford County, Thacker Griffin, of Marshall, J.K. Speer, Reynolds, Carmack, and one of the Kendricks. We cannot estimate the good accomplished by these self-sacrificing men, nor can we mention all who were "added to the church" through their ministrations at old Philadelphia.

The year 1848, under the preaching of Eichbaum and Trott, was the most successful in additions. Great numbers of the young people became obedient during that year. George Stroud and David Ramsey were elders for the church at that time, and continued until their death, which occurred during the civil war.

Brother Jesse L. Sewell began his labors with this congregation in the year 1858. He preached monthly for the church for several years except as the church allowed him to go to other places where he thought he could do most good. This church never disbanded during the war, and failed to meet for worship but two Lord's days during the time, and this because the Federal soldiers had possession of the house and grounds for camping purposes. There have been but very few Lord's days during the fifty-nine years since its organization that the church did not meet for worship, and those were extremely cold or stormy days.

In 1864 A.G. Logue and Joseph Wagner were appointed elders for the congregation. This office is held by the former until this day, and was held by the latter until the removal, about the year 1870, of his membership to Antioch. Upon his removal S. McRamsey was appointed to fill the vacancy. Afterwards G.W. Ramsey was added. Through all this time all the teaching and preaching has been done under the direction and advice of the eldership. The church never had a pastor.

Among those who have done monthly preaching for this church since the war may be mentioned J.L. Sewell, W.Z. Keykendall, W.H. Sutton, and W.A. Sewell. Many others have preached occasionally. They have had regular monthly preaching but very little of this period of twenty-eight years—1864-1892.

This church is noted for its annual August meetings. The second Lord's day in August is the "time-honored time" for the beginning of these meetings. THe order of these meetings almost invariably has been two sermons in the day with dinner on the ground. Among the preachers who have labored in these meetings can be mentioned Jesse L. Sewell, E.G. Sewell, S.A. Kelley, J.M. Barnes, D. Lipscomb, W.Z. Kuykendall, J.M. Kidwill, L.R. Sewell, Granville Lipscomb, W.H. Sutton, W.T. Kidwill. There have been additions at all these meetings but two. During these years several hundred persons have been brought to Christ. Seven preachers have been reared in the church and sent out to the world to do the Master's work, all doing acceptable work. One has passed over the river; the others are still battling on. Three of these are young in the ministry, the others just in the prime of life and vigorous manhood. Besides these, the church has reared and sent abroad many other valuable workers, such as elders, deacons, Sunday-school superintendents, etc. Many congregations have been strengthened and some new ones formed by members who have gone out from old Philadelphia. Antioch, in Coffee county, some six or eight miles from Philadelphia, was formed from Philadelphia membership.

Two or three years ago it was thought best to build houses of worship in Viola and Morrison, divide the membership and disband at Philadelphia. They built at Viola, and part of Philadelphia's and all of Antioch's membership enrolled at Viola.

The intention of building at Morrison was not carried out, and old Philadelphia still maintains her existence with a fair membership of zealous workers. Although Brother Jesse Sewell lived at Viola, he and his wife were so much attached to Philadelphia that hey never moved their membership, but continued to assemble themselves with the church at Philadelphia while they lived, and now lie buried with her honored dead.

There now stands within a few hundred yards of the old Blue Springs church, that once closed its doors against Brothers Curlee and Ramsey, thinking to crush out the truth they preached by force, a neat and substantial church building in which worships a live and growing church. The Blue Springs church, though once rebuilt, now shows, like all unoccupied houses do, the marks of decay, while the church that once held its doors against the truth is dead.

-A sketch of the rise and progress of the Church of Christ at Philadelphia, Warren county, Tenn. By C.W. Sewell, from facts furnished by William Ramsey and Aaron Logue, Gospel Advocate, May 18, 1893, page 307

*Note: Records of the Rocky Springs Church of Christ in Jackson County, Alabama reveal that William J. Price was baptized at Old Philadelphia, Warren County in 1811. Thus, a work appears to have been conducted at Old Philadelphia much earlier than the 1833 date mentioned in the article above.

In Middle Tennessee, take Exit 111 off I-24, McMinnville Exit and heading toward McMinnville, turn right immediately on Ragsdale Road. Go 11 miles to dead end (into Hillsboro Rd. - State Hwy 127) Turn left and go until you dead into State Highway 108. Continue north on 108 through Viola township. Go about two miles and turn left on Tennessee Hwy 287. Go 2.4 miles and turn right on Vervilla Rd. Old Philadelphia is 1.7 miles out on the right.

From McMinnville, Go southwest on Highway 55 toward Morrison. Turn left at Warren County High School. Go to Vervilla Road; turn left. Look for the sign and church building on the left. 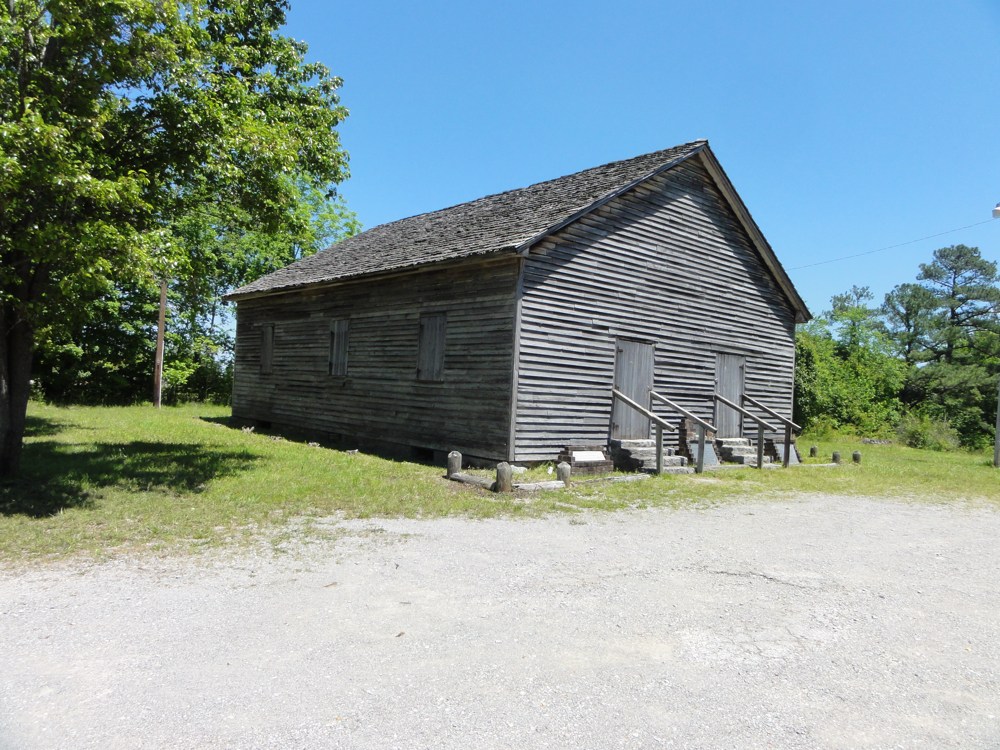 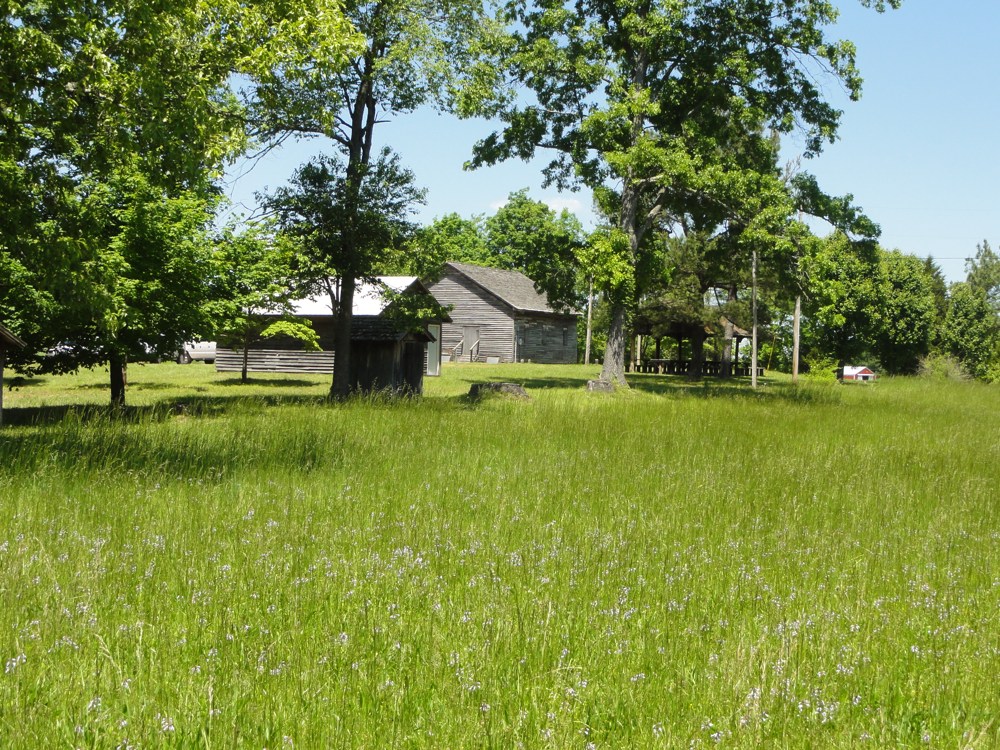 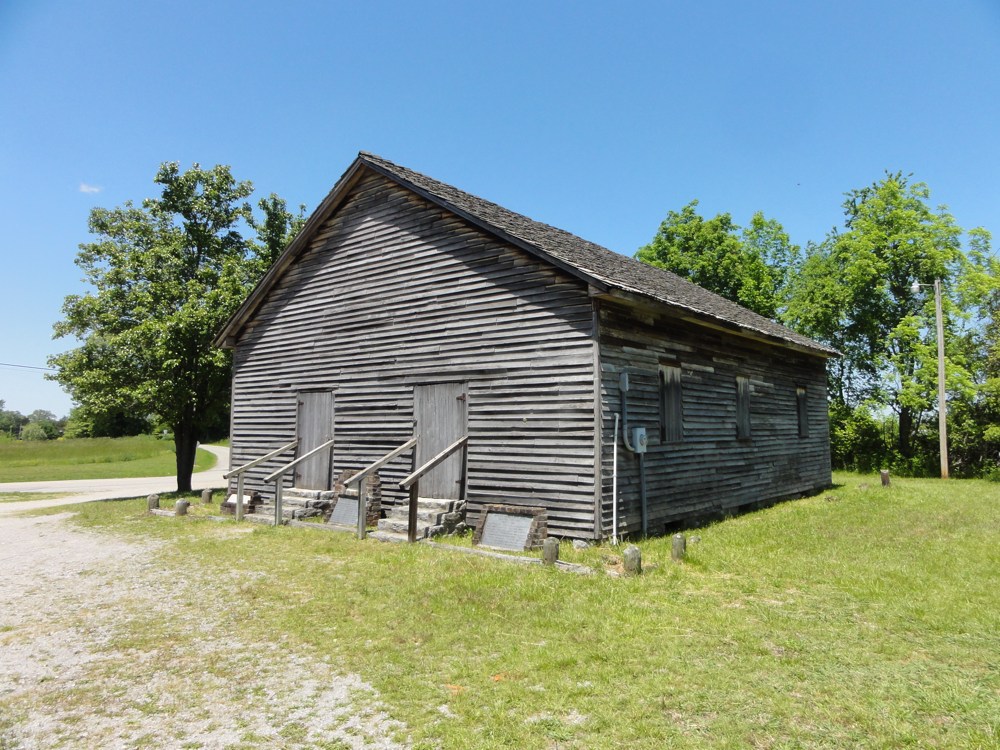 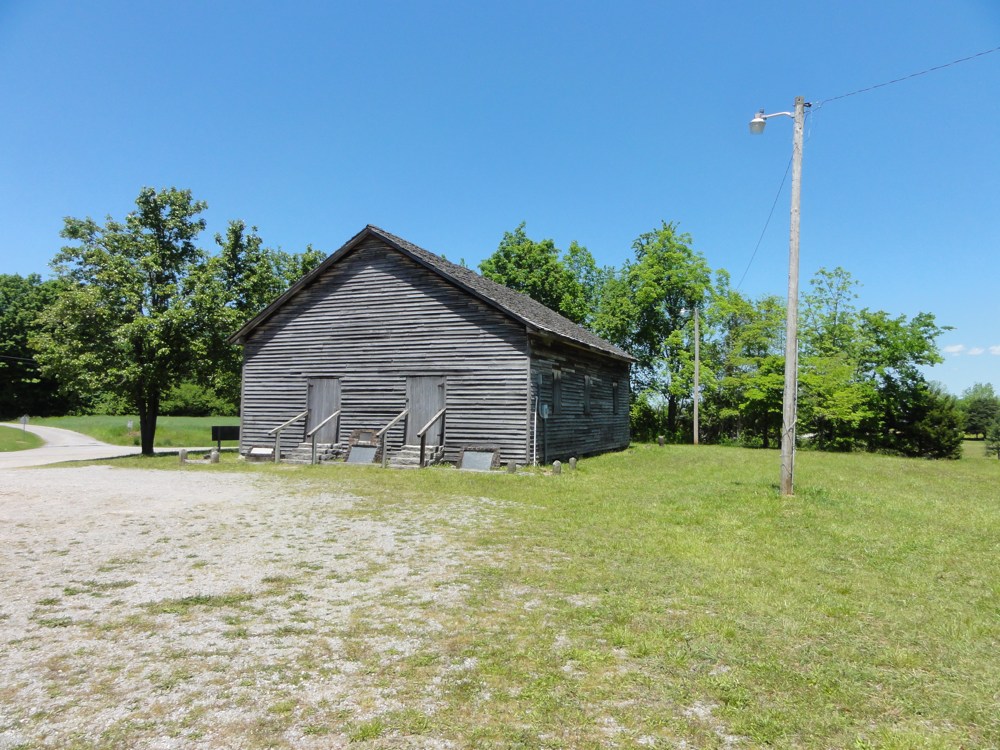 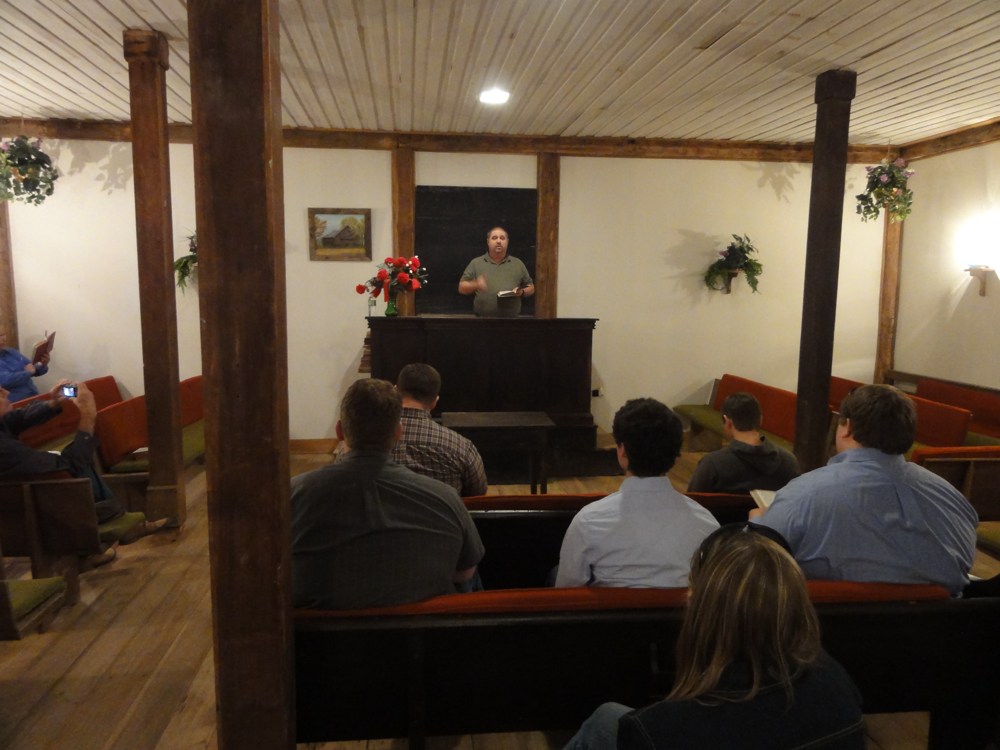 Geoff Mabe In The Pulpit Where Many Great Preachers Have Proclaimed The Word Of God
May, 2013 Restoration Tour of Students From Southeast Institute Of Biblical Studies 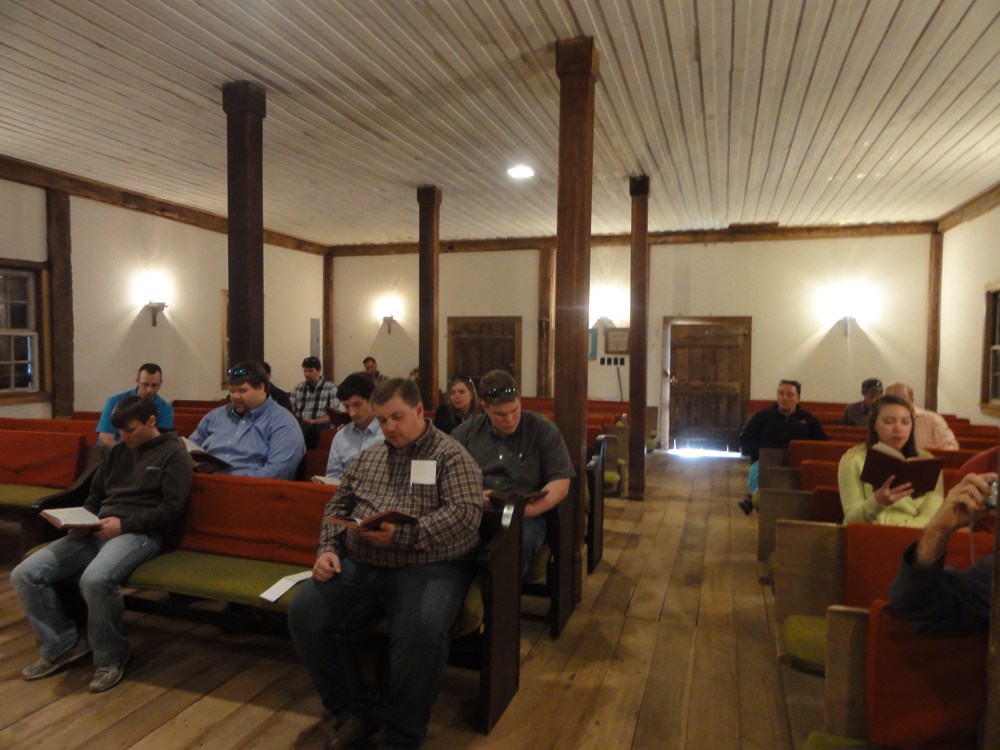 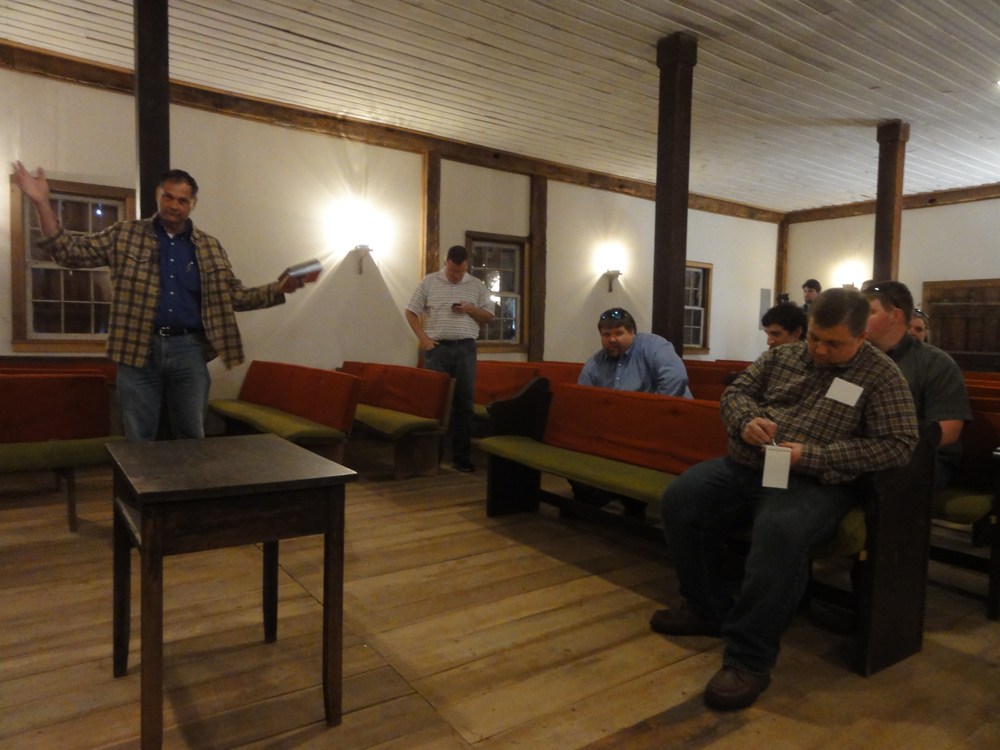 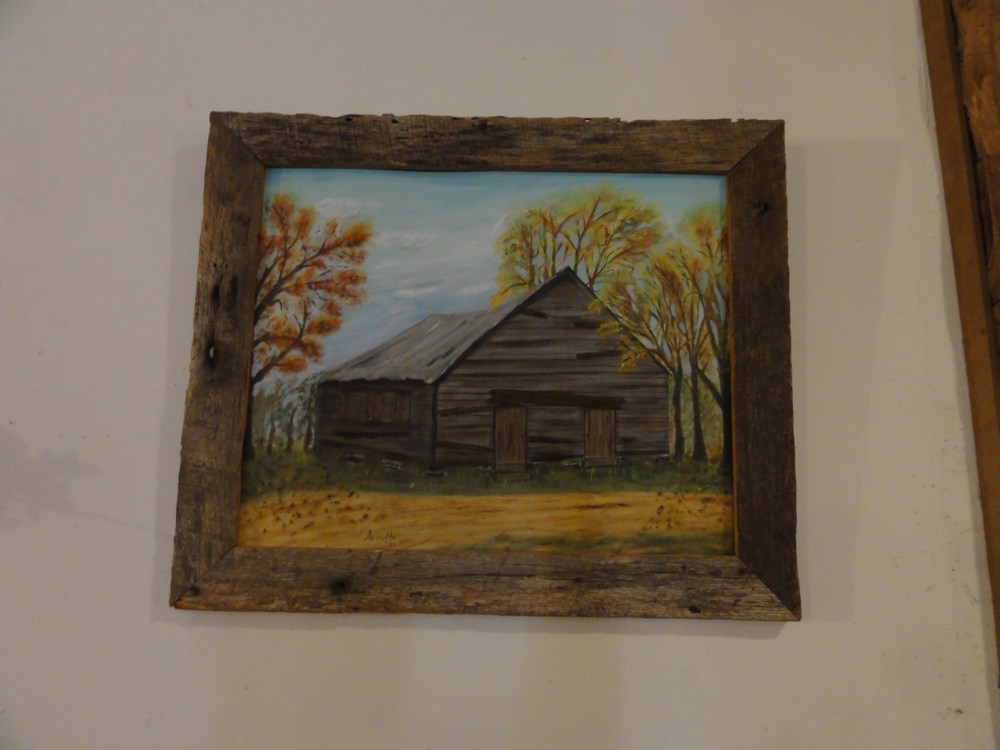 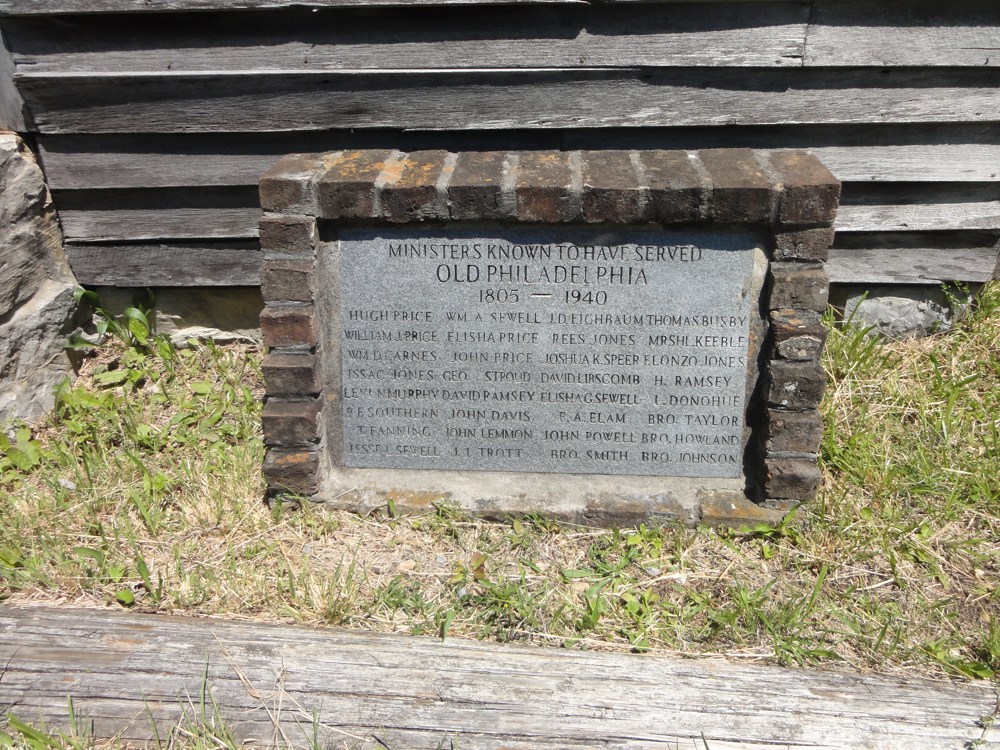 Web Editors Note: Names Unlinked To Sites Above Are Being Researched.
Any Information Made Available On Any Of These Would Be Greatly Appreciated

In Middle Tennessee, take Exit 111 off I-24, McMinnville Exit and heading toward McMinnville, turn right immediately on Ragsdale Road. Go 11 miles to dead end (into Hillsboro Rd. - State Hwy 127) Turn left and go until you dead into State Highway 108. Continue north on 108 through Viola township. Go about two miles and turn left on Tennessee Hwy 287. Go 2.4 miles and turn right on Vervilla Rd. Old Philadelphia is 1.7 miles out on the right.

From McMinnville, Go southwest on Highway 55 toward Morrison. Turn left at Warren County High School. Go to Vervilla Road; turn left. Look for the sign and church building on the left.

*Note: Records of the Rocky Springs Church of Christ in Jackson County, Alabama reveal that William J. Price was baptized at Old Philadelphia, Warren County in 1811. Thus, a work appears to have been conducted at Old Philadelphia much earlier than the 1833 date mentioned in the article above.

See This In-depth History Of The Work At Old Philadelphia

See This Link On Old Philadelphia